In the last year alone NOBULL have added two of the Fittest Women on Earth, Tia-Clair Toomey and Katrin Davidsdottir to their roster, launched a film festival dedicated to the sport of Fitness and increased their bricks and mortar footprint to a total of 3 stores. But NOBULL are exactly that…no bull. Their core business remains the creation of footwear and apparel for people who train hard and don’t believe in excuses. Founded in just 2015, the brand has grown at a phenomenal pace and now dominates the CrossFit space, is expanding beyond it, and has created a cult brand worshipped by its consumers in the process.

We caught up with Todd Meleney, Vice President of Marketing for NOBULL, to find out the secrets behind the horns of one of the coolest projects in fitness. 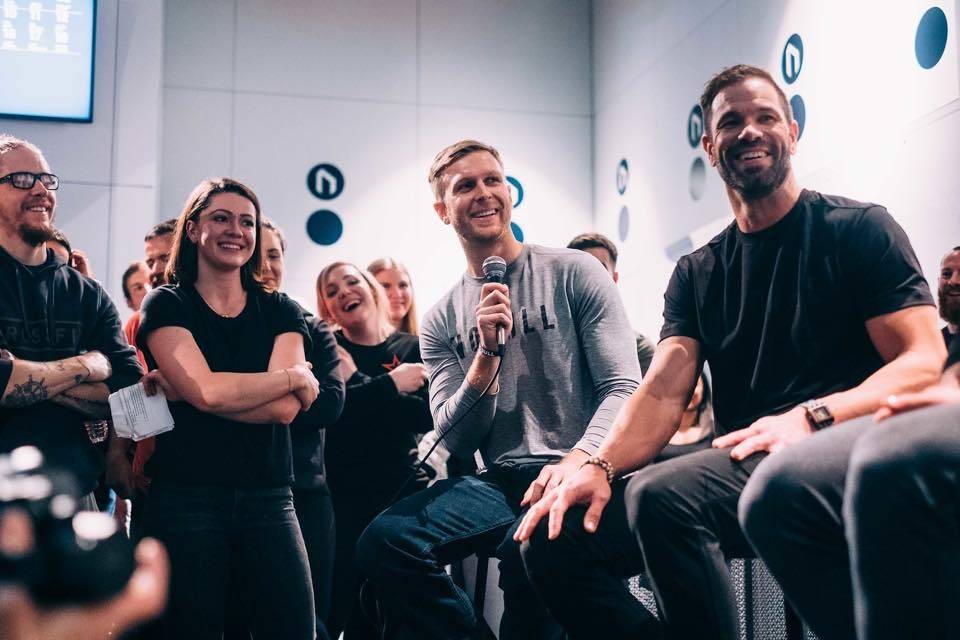 "The Product Has To Stand Out On Its Own But The Story Line Is What Really Helps to Tie The Consumer in emotionally."

NOBULL has a way of telling incredible and engaging stories around the brand and your products, how do the NOBULL stories start?

A lot of our stories start from deeply and thoroughly understanding what the relevant topics are that our customer are engaging with - not only in the gym, but outside of their gym life too. What are the current events and TV shows that are popular? What is the type of sense of humour that they have? What is inspiring, motivating and interesting to them? That is what we can then use to help shape the way we think about engaging with them.

The product needs to stand on its own no matter what and people need to love the product with or without a great content story line. But the storyline is what helps really tie the consumer in emotionally for us. Some examples that come to mind of this working really well are the Floral Shop Campaign that we did with Jared Stevens, and we also used that formula with Brooke's Coffee Roasters, these themes were so strong and relevant to our consumer that they could stand on their own. 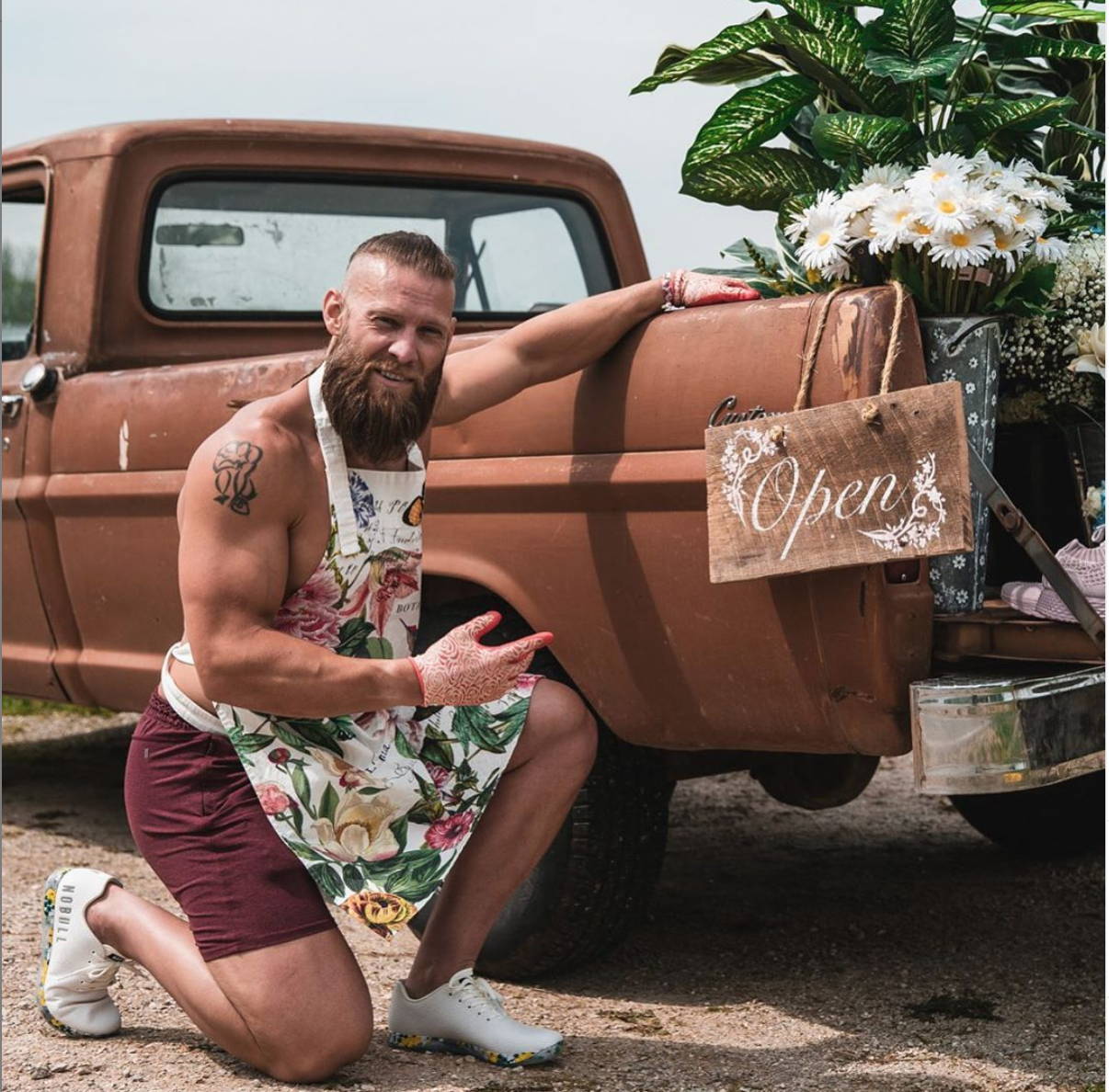 "The idea was to create a fake floral shop, and create a spoof around Jared, this behemoth man cutting and trimming flowers in this little studio."

Let’s talk about the Floral Shop campaign, how did that come to life?

So with the Floral Shop, we had already had a successful floral collection launch the previous years in both 2016 and 2017, where we had come out with floral patterned shoes. But we were constantly looking for ways to challenge the way we produce content, tell stories and launch product so that the consumer doesn't get bored of the rinse and repeat, very frequent product launches. Product launches are such a big part of our brand culture and our identity so it was important to get our consumer thinking about product without us just talking and telling them about the product. With the Floral Shop in 2018, that really came out of knowing the personalities of our athletes really well and what can we create to help illuminate the athlete as well as surprise, delight and entertain both the customer that is already a fan of the athlete, but also the customer that may not necessarily know them yet too. The idea was to create a fake floral shop that has a feel of The Office, the TV show, and create a spoof around Jared, this behemoth man cutting and trimming flowers in this little studio that we created. 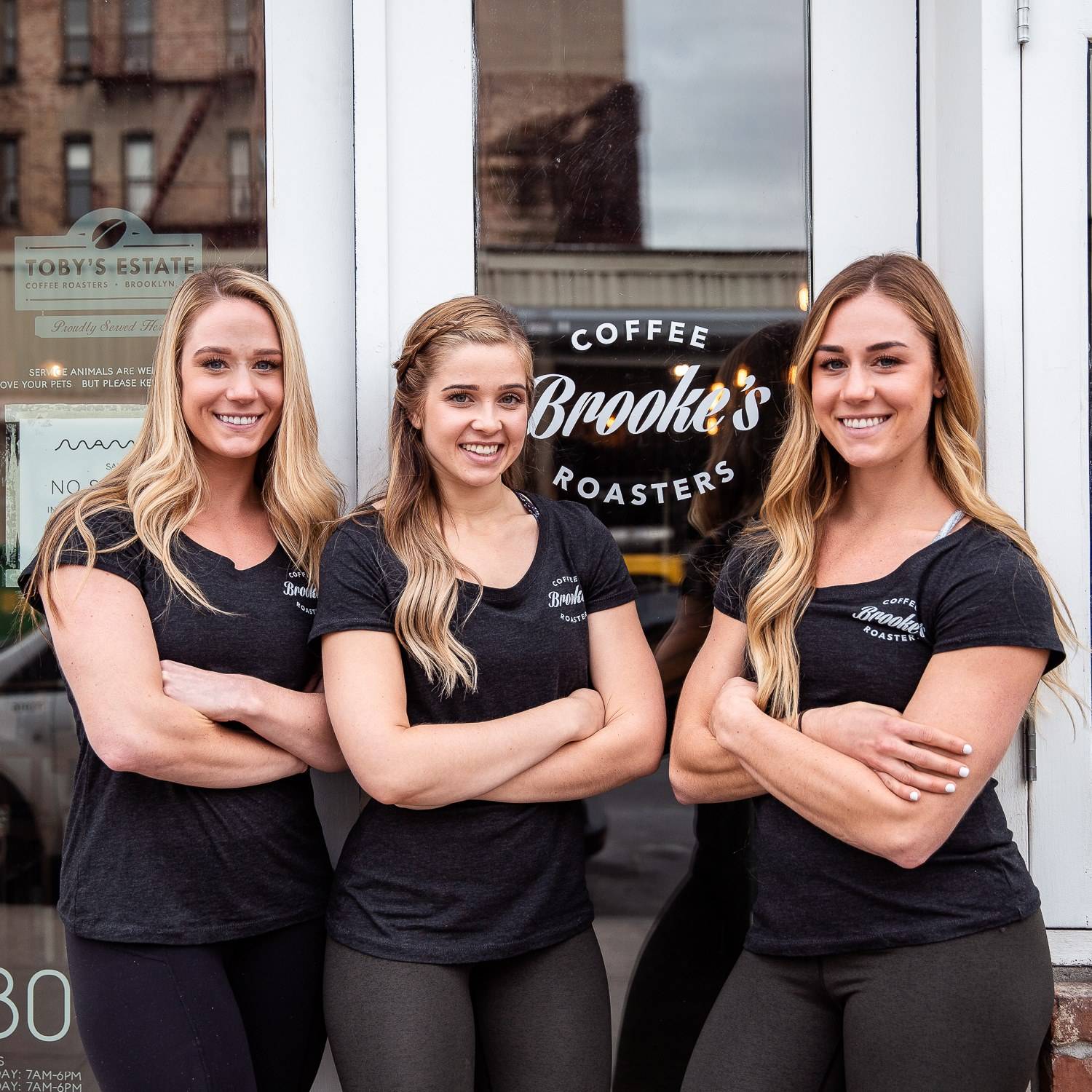 "What we tried to do was take the personality that you see on social and just enhance it. We brought the real characters in her life into it as we knew that would make it believable."

You only have to read some of the customer comments on your Instagram posts to see the power of your brand, why do you think your consumer is so invested in NOBULL?

To me the most powerful and effective form of marketing is word of mouth. If someone I know tells me to go to this restaurant, I'm a hundred times more likely to go to that restaurant than if I just see it on the internet. If somebody tells me this story about a floral shop or a floral collection and was like, 'hey, did you see that new collection that Brooke launched or the coffee shop?’, all of a sudden they're talking about things that are orbiting the NOBULL brand and they are helping stimulate and do the work for us. If we have to push the product on them, then it won't work, and you won't be able to do that long term. And we identified that pretty early on, that we wanted to create an environment where our customers were talking about our products without us having to kind of be involved in that. With Jared’s Floral Shop, that concept was something that I brought to NOBULL Founders Marcus and Michael, as I thought it really could work even though it was way outside of the box. The shop set cost around $500 to make, Jared had no idea what we were doing. We rented out this little empty space five minutes from my house. I went picked up Jared from the airport, then pulled up in front of this storefront that was fully branded ‘Jared's Floral Shop' with 'made to flourish' and 'leaf an impression' and all of these different things. It was fully merchandised with $300 worth of fake flowers that I bought at the art store. We had no clue how it was going to go, but we knew that the only chance of success was if we went one hundred percent into the story. So we rolled out the Floral Shop. People thought it was real. The collection exploded. It was like one of our most successful product launches ever at the time. Then the next month I went to the Central Regional to watch Jared and Brooke and Sam and everybody compete, I was standing with Jared and just one after another people were coming up and asking him about his new business and congratulating him, everyone thought it was real! It was then I thought to myself that we've got a concept here and we need to run with this.

And so we went on and did it with Brooke and brought her sister Sydney her best friend Aspen in on it too. We brought the real characters in her life into it as we knew that would make it believable. What we tried to do was take the personality that you see on social and just enhance it and make it even more real for them with just higher production quality. So with Brooke, we found a place in Brooklyn and created Brooke's Coffee Roasters. We didn't talk about product at all. The only thing we did was at the very end of the video we slow panned over a couple of shoes with some coffee beans on the ground and it said Brooke's Coffee Roaster Collection. The shoes were called the latte and espresso knit runner. At the time, analytically, these things were viral, off the charts! 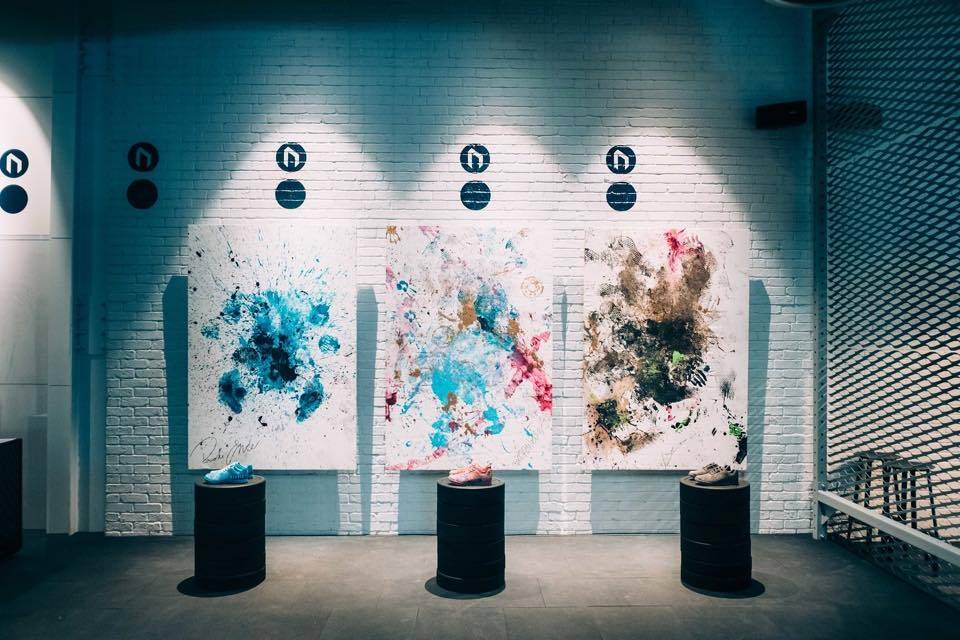 "For the 1st Art Work Collection, we came over to London and turned WIT into an art gallery . We didn't want to come in and do something that was expected."

Tell us a bit about the latest Art Work collection and how that is itself a franchise within the NOBULL brand?

There are key franchises for the brand that have developed into core pillars that we plan into the year, the Art Work is one of these. We did this for the first time back in 2018 where we launched the Art Work collection in London, at WIT House Ldn in St Pauls. Art Work brings in the creativity from a design perspective that the brand has as well. It brings in an artistic flair. When you see those designs, they're very spontaneous, gritty and cool, but also artistic and sophisticated that starts to speak a different part of who we are as a brand and what we stand for and what we believe in. In both cases, the Art Work launches have been huge community activations. The first time we created the product with the athletes and created content for it but the way we launched it, we came over to London and turned WIT into an art gallery. That was during the same month that two other major brands had huge product launches where they also brought their athlete assets into the WIT space, it was almost sequential three weeks in a row where each big brand had a huge campaign that they came to London and activated. So we didn't want to come in and do something that was expected because by then, after a month of these events, the consumer is going to get bored of it. So we thought of taking the original art Work that these athletes created and make an art gallery out of a gym. We had a full silent auction, launched online and overnight raised fifty thousand dollars for non-profit, which was donated. The product launch was incredible! We launched it at 5AM in London while the Boston team were online handling everything digitally and we made an incredible weekend out of it that the community still remembers it, we still talk about it and celebrate it so we wanted to revisit it a couple of years later.

This is where the second Art Work collection has come to life. We took one of our physical locations in Wynwood, Miami, which has that art culture and brought our community in using Kent Youngstrom, who created the whole paint with equipment concept and painted the whole outside of our Wynwood store and it just came out absolutely epic. We took that into a collection of footwear and apparel that looks like the Miami vibe from our store that can now bring home with the product. 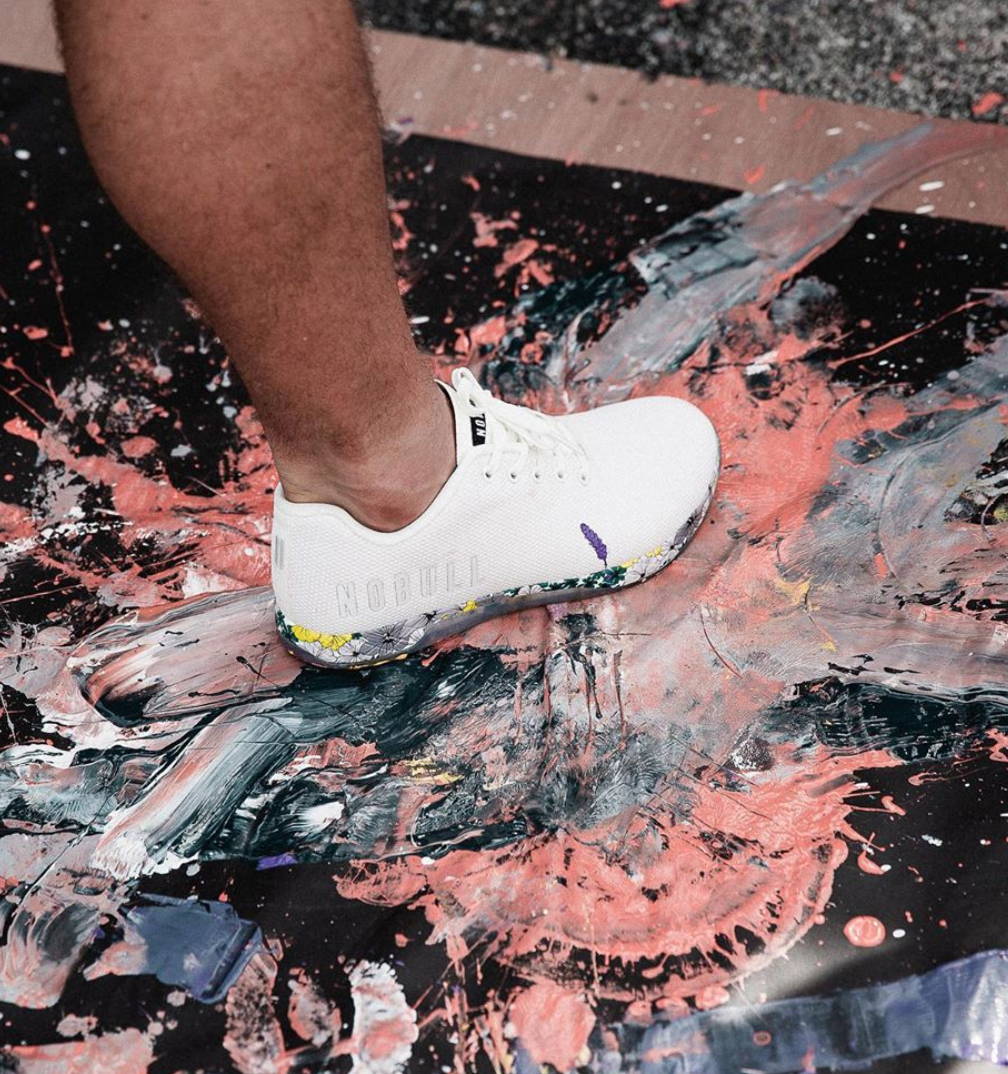 With the 2nd Art Work Collection we took one of our physical locations in Wynwood, Miami, which has that art culture and brought our community in and it just came out absolutely epic.

The 2nd 6-piece NOBULL Art Work Collection in launching at WIT Europe at 5AM BST on the 29/05. Two of the iconic shoes will also be launching on WIT USA at midnight ET on 29/05. You can sign up for first access to the limited drops now on the WIT launches page to ensure you get a pair from this iconic NOBULL launch. Do not miss out.